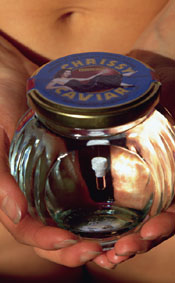 White Sturgeon roe, or Beluga caviar, one of the world's greatest delicacies, is usually marketed in metal tins or glass jars. I am reassigning the use of small, glass jars, in order to create a conceptual art object. By slightly adjusting the standard wording on the product label to reflect its new, unique contents, and replacing the usual image of a fish with a photograph of myself, reclining in elegant evening wear, I am creating a new product: Chrissy Caviar®, of the Human, Caucasian variety. Placed inside each jar there is, instead of fish roe, one of my eggs. Combined with human tubal fluid, each egg is anaerobically sealed inside the same sort of biology specimen research and transport tube that scientists use for mouse and human eggs and/or embryos (note: mouse and hamster eggs are physically and genetically similar to human eggs, and they are used by in-vitro fertilization labs for practice and research purposes). Each filled tube is suspended in a clear, viscous silicone-based liquid, inside each jar, and sealed. The series includes twelve jars, based on the idea of hens' eggs being commercially packaged by the dozen.

Through my research, I have arranged for glass jars, lids and labels to be manufactured and supplied, as well as customized, glass specimen tubes complete with caps. I have also contracted an embryologist, who packaged each egg for me at an IVF lab under the proper, sterile conditions. He, in turn, introduced me to an endocrinologist, who prescribed a month's worth of injectable hormone treatments, and tracked my progress with ultrasound, and blood tests, so that during ovulation, I produced approximately twelve eggs instead of the typical single egg, of a normal ovulatory cycle. At the appropriate time the mature eggs were harvested. The procedure is the same used when a woman "donates" (usually for a fee) her eggs to another couple, an older woman, or an infertile woman who has attempted to conceive the natural way. The difference is, my eggs were gathered and used to make art, not embryos. The procedure is not too hazardous, when done properly, and it will not cause me to become sterile or anything. In fact, I have returned to a regular cycle, since the additional hormones have been discontinued. I ran the slightest risk of pulmonary edema from the treatments, but I was willing to accept that minor risk because of my overall good health, my age, and this project's importance to me.

The final body of work consists of a small, numbered series of Chrissy Caviar®, the ultimate, consumable product. The Chrissy Caviar® installation, displayed in its deli-style refrigerated case, kicks off its National Tour at the Tang Teaching Museum and Art Gallery, Saratoga Springs, New York, September 8, 2007 – April 13, 2008, as part of the exhibition "Molecules That Matter." Then it travels to the Chemical Heritage Foundation, Philadelphia, Pennsylvania, August 1, 2008 – January 30, 2009, The College of Wooster Art Museum, Wooster, Ohio, March 24, 2009 – May 10, 2009, Mayborn Museum Complex, Baylor University, June 2009 – August 2009, Grinnell College, Grinnell Iowa, September 25, 2009 – December 13, 2009. Recent shows include: the DeCordova Museum and Sculpture Park in Lincoln, MA, February 7 – May 30, 2004, as part of their exhibition entitled "Self Evidence: Identity in Contemporary Art," the Project Room solo show at Stefan Stux Gallery, November 14, 2002 – January 4, 2003, after most importantly making its debut at the Aldrich Museum of Contemporary Art in Ridgefield, CT, May 19 – September 4, 2002, as part of their exhibition entitled "Family."

Supporting elements are as follows: Each jar, lid and label comes signed and sealed, with its own mother-of-pearl spoon. I videotaped the pre-op process and the medical procedure, and edited the footage. The final, edited 10 minute documentary-style, "Making Chrissy Caviar" DVD will be shown. Poster-sized limited edition, giclee and silkscreen signed prints are available, as well as limited edition, Duraflex signed prints of me, holding a sculptural component. The www.chrissycaviar.com website is modeled after egg-donor advertising sites, with my genetic history, complete with Russian ancestry, and other relevant information. A limited edition, Chrissy Caviar Floaty Pen, which shows an egg that floats back and forth between an ovary and a jar, is also part of the final body of work. My feelings about being a thirty-something, single woman who has yet to be married and have a child, the concept of advertising myself and my DNA as a product for consideration and consumption, and the experience of going through this medical procedure in order to literally put the most precious piece of myself into my art, are all reasons explaining the motivation behind this project.

My hope: My eggs, as a concept, Chrissy Caviar®, actually produced into packaged goods, and taken out of their normal context, will surpass Beluga caviar as the current ultimate in luxury, consumable items. In the context of fine art, using my genes as a commodity, I am making art with my body, by collaborating with technology. And I am trying to manifest, and be productive with, my highly emotional desires to find Mr. Right, and create a family together.